Having had a think about the Farseers suppoting role in the army, it seemed to make sense that he be given the extra mobility of a Jetbike, also for the points he gains a point of toughness and a very respectable 3+ save making him more resilient. So without further ado here is my newly converted and painted Farseer on Jetbike aka 'Jetbike Geoff'. 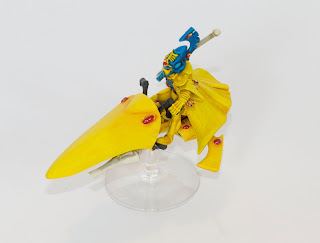 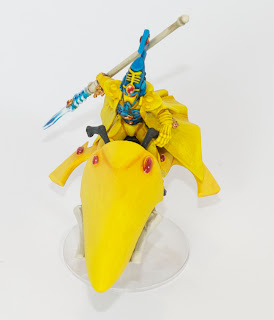 As you can see I've made the model from the new plastic Farseer model and the standard Jetbike kit, I'm really pleased how it came out and using all plastic models really helped. The Jetbike looks a little too yellow and plain at the moment, once the other Jetbikes are complete I'll decide what to do iconography wise. This was also my first attempt at a NMM (non metallic metal) weapon, I went with a blue to white theme, similar to that of the 'force lightning' of the Farseer on the front of the Codex.
Posted by RichV37 at 11:49